Training zones are intensity levels within which certain activities should be completed in order to achieve better training effect.
There are several popular methods of determining your training zones limits which differ in the number of zones, basis of their calculation and zones limits.
In Staminity we calculate intensity zones limits using the following methods:

In The Triathlete's Training Bible Joe Friel defines seven training zones which limits are calculated in percentage of athlete's LTHR, separately for running and cycling:

In order to calculate HR zones limits according to Joe Friel method you need to fill in LT value, select the corresponding method of calculation in zones settings and save changes: 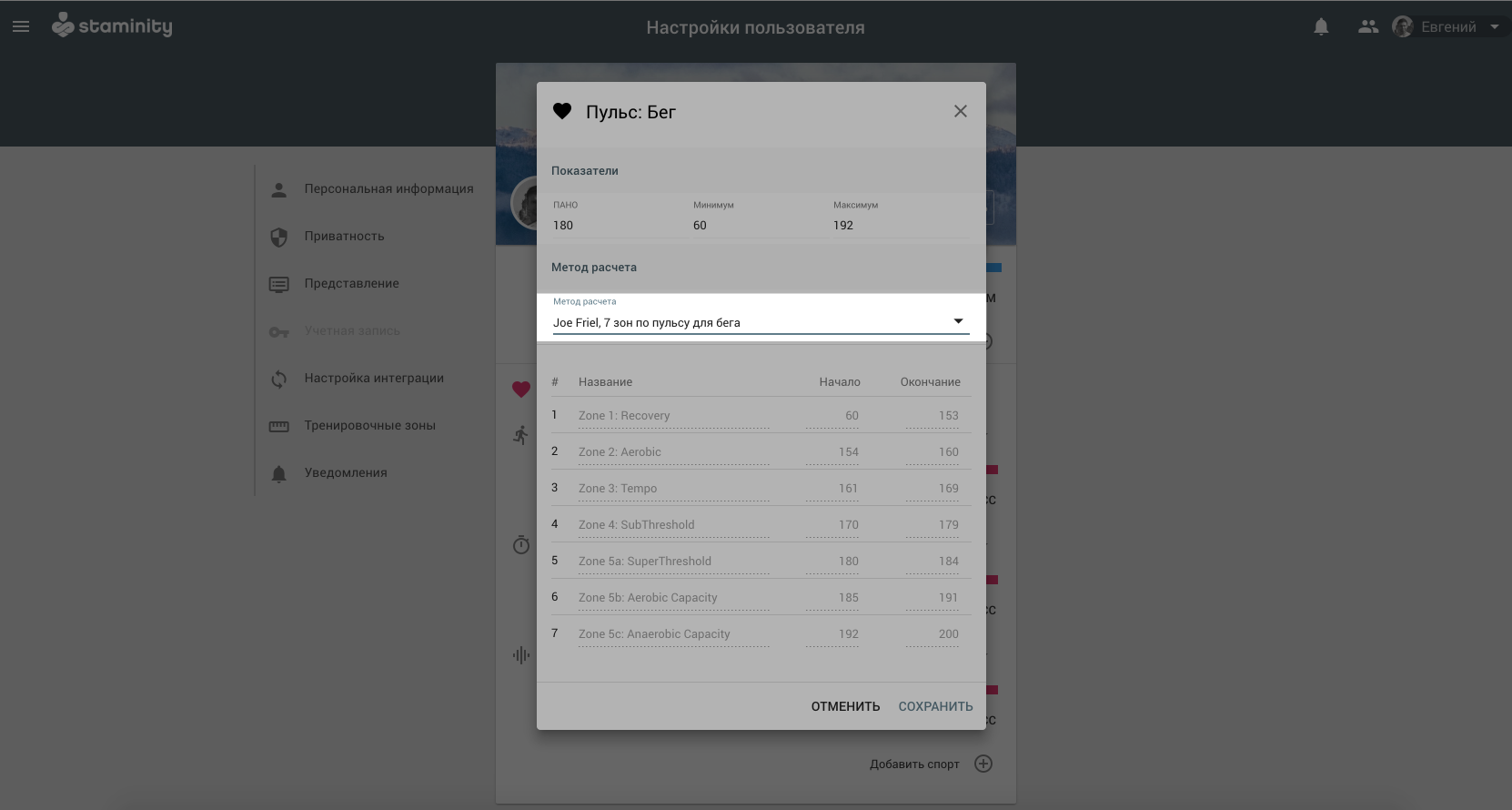 Recovery (zone 1). Activities within zone 1 limits include the most simple exercises helping experienced athletes to recover after hard exercises or a period of complex activities.

Extensive endurance (zone 2). This intensity type is characterized by long activities focused on endurance development. When completing exercises at such efforts level, formation and then maintenance of aerobic endurance take place. During such activities, lactate is produced in relatively small quantities, which allows to complete long, but at the same time, comfortable training sessions at the athlete's aerobic endurance limit (or a bit higher).

Intensive endurance (zone 3). With a minor increase in intensity, the production of lactate begins to increase compared to the previous levels, as in addition to the slow twitch muscle fibers, fast twitch ones spring into action.

Intensity threshold (zones 4 and 5a). Possibly, the most important training zone for all-round athletes. The efforts level here is slightly above or slightly below the LT. Thus, aerobic mechanisms are used to the full, the main load falls to slow twitch muscle fibers and body systems that produce energy. A significant part of it starts to produce thanks to anaerobic mechanisms; in the body there appear improvements associated with immunity to the effect of lactate and accelerated utilization of its decay products. Moreover, fast twitch muscle fibers start to show characteristics of the slow twitch ones. In order to separate efforts applied lower and higher the LT level, the intensity threshold is divided into two zones.

Anaerobic endurance (zone 5b). At this stage intensity level is higher than LT. Structured activities are typical for this zone. This stage facilitates growth and development of fast twitch muscle fibers and the body's ability to resist the effect of lactate and utilize it. Great volume of activities focused on anaerobic endurance development represents the most common reason of professional athletes' overtraining so these activities should be treated with caution, and they should be followed by a long period of recovery.

Power (zone 5c). Power development is not so important for all-round athletes. Except for situations when an athlete faces difficulties with muscle mass building or when he needs to use fast twitch muscle fibers to increase speed. Power development exercises should consist of short explosive intervals separated by long recovery periods.

Peter Janssen in his book "Training Lactate Pulse-Rate" describes 6 intensity zones and calculates their limits in percentage of HRmax.

HRmax - the athlete's maximum heart rate occurred during testing in a laboratory or during a competition.

In order to calculate HR zones limits according to Peter Janssen method you need to fill in HRmax value, select the corresponding method of calculation in zones settings and save changes: 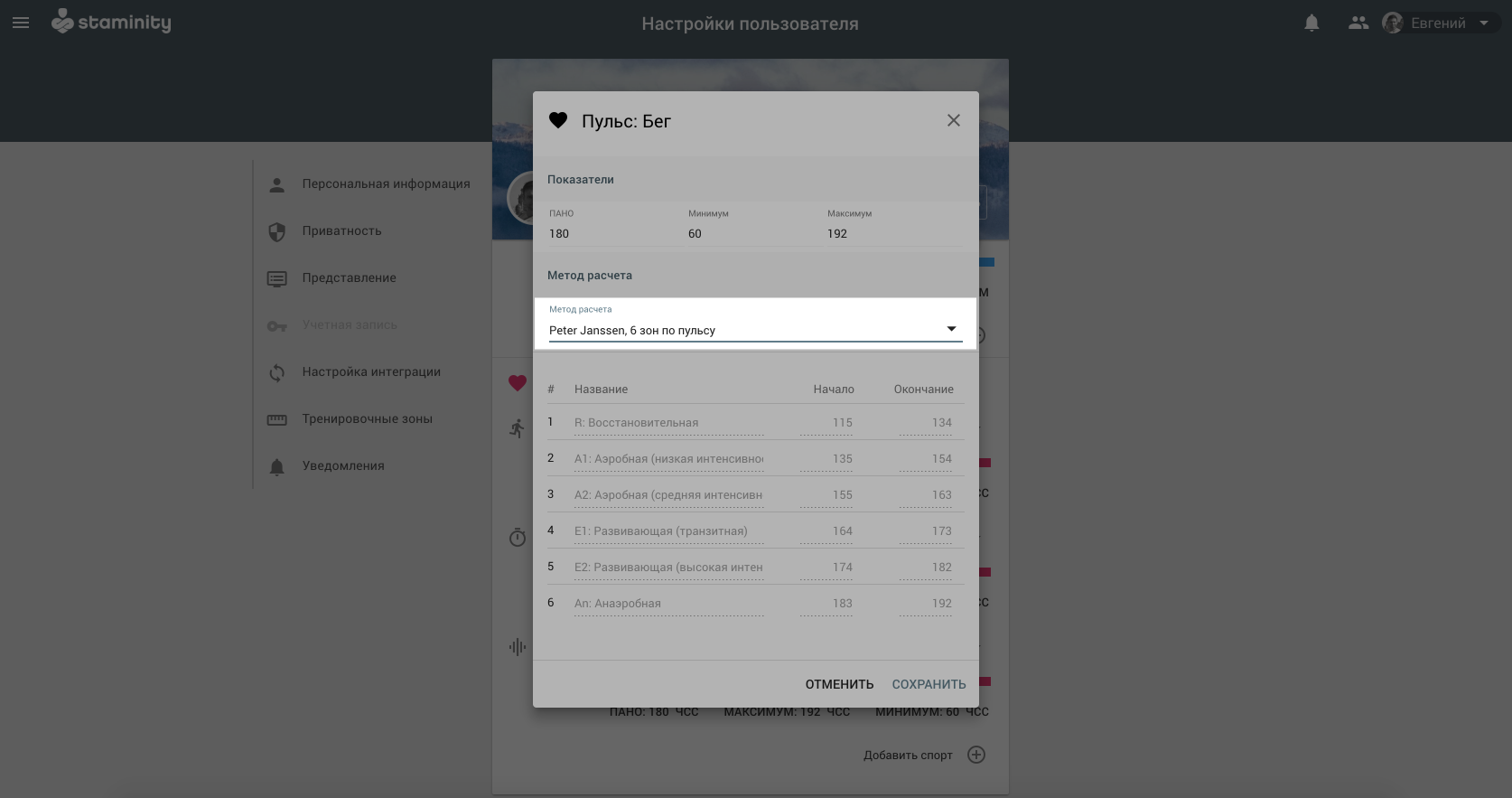 Finnish physiologist Martti Karvonen offered to calculate intensity based on HRreserve, which is determined as HRmax - HRrest.

Based on it, 5 intensity zones are determined according to the following rules:

In order to calculate HR zones limits according to Martti Karvonen method you need to fill in HRrest and HRmax values, select the corresponding method of calculation in zones settings and save changes: 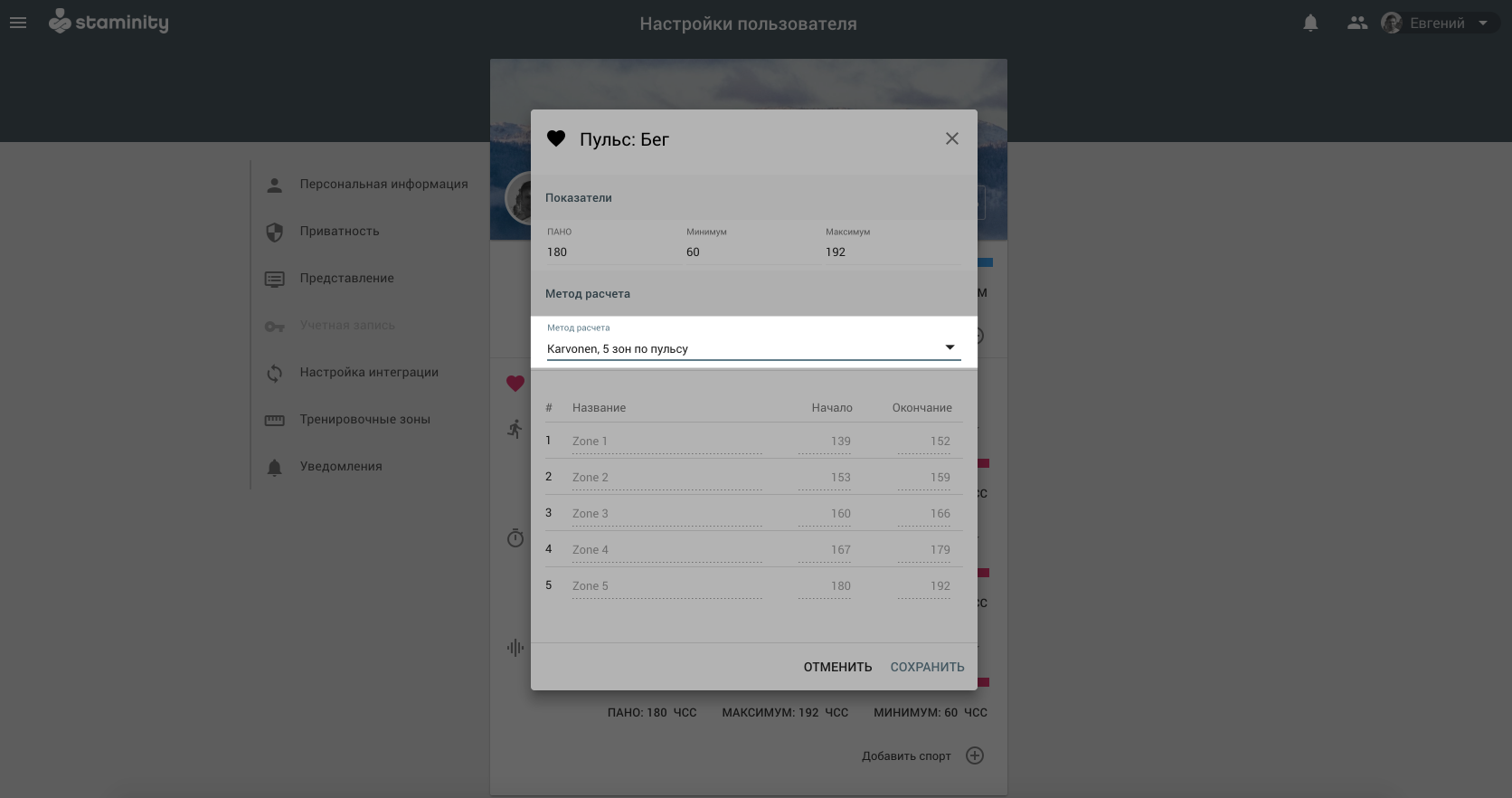 In order to calculate HR zones limits according to Joe Friel method you need to fill in LTPace value, select the corresponding method of calculation in zones settings and save changes: 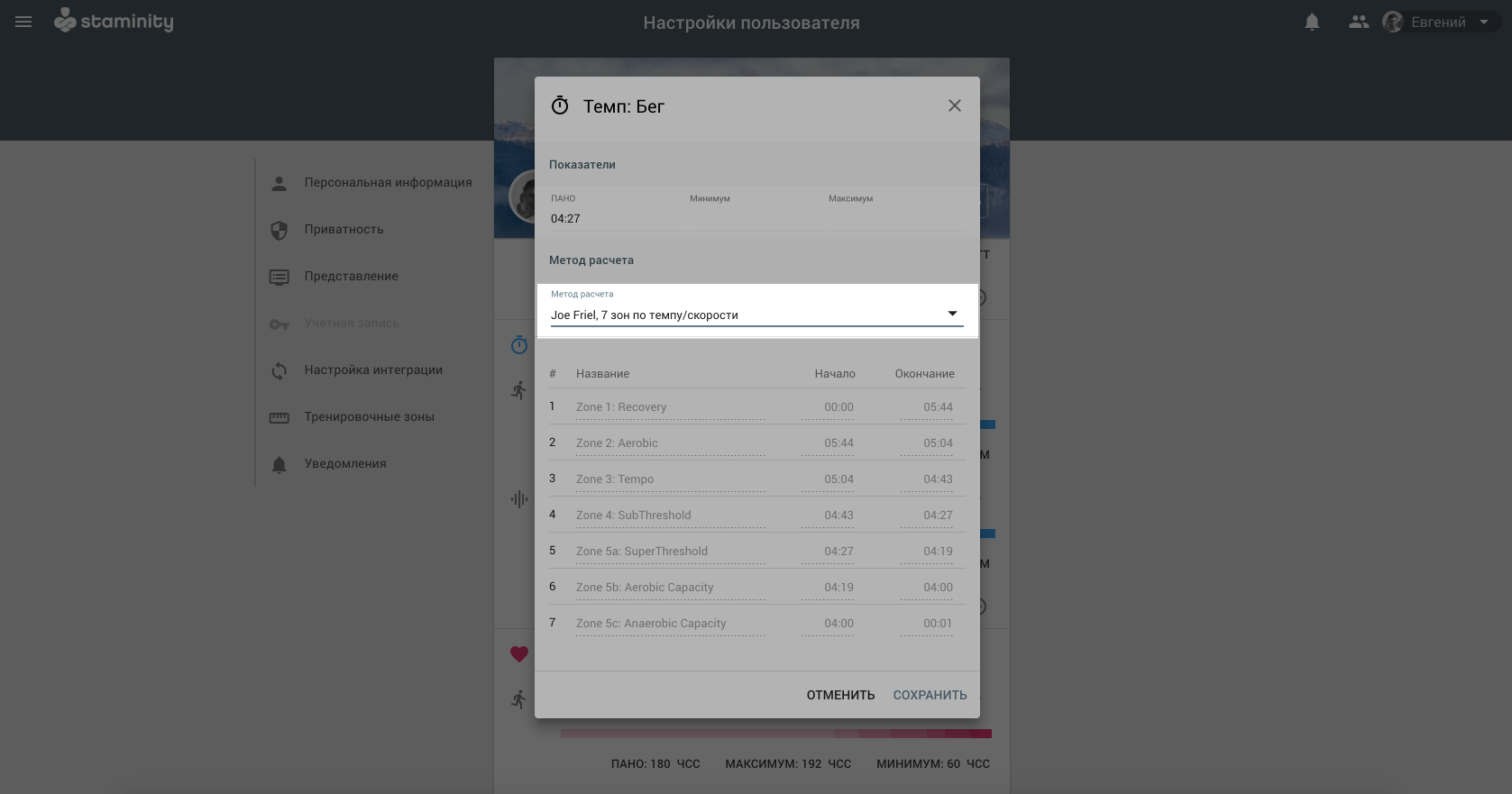 In order to calculate HR zones limits according to Joe Friel method you need to fill in LTPower value, select the corresponding method of calculation in zones settings and save changes: 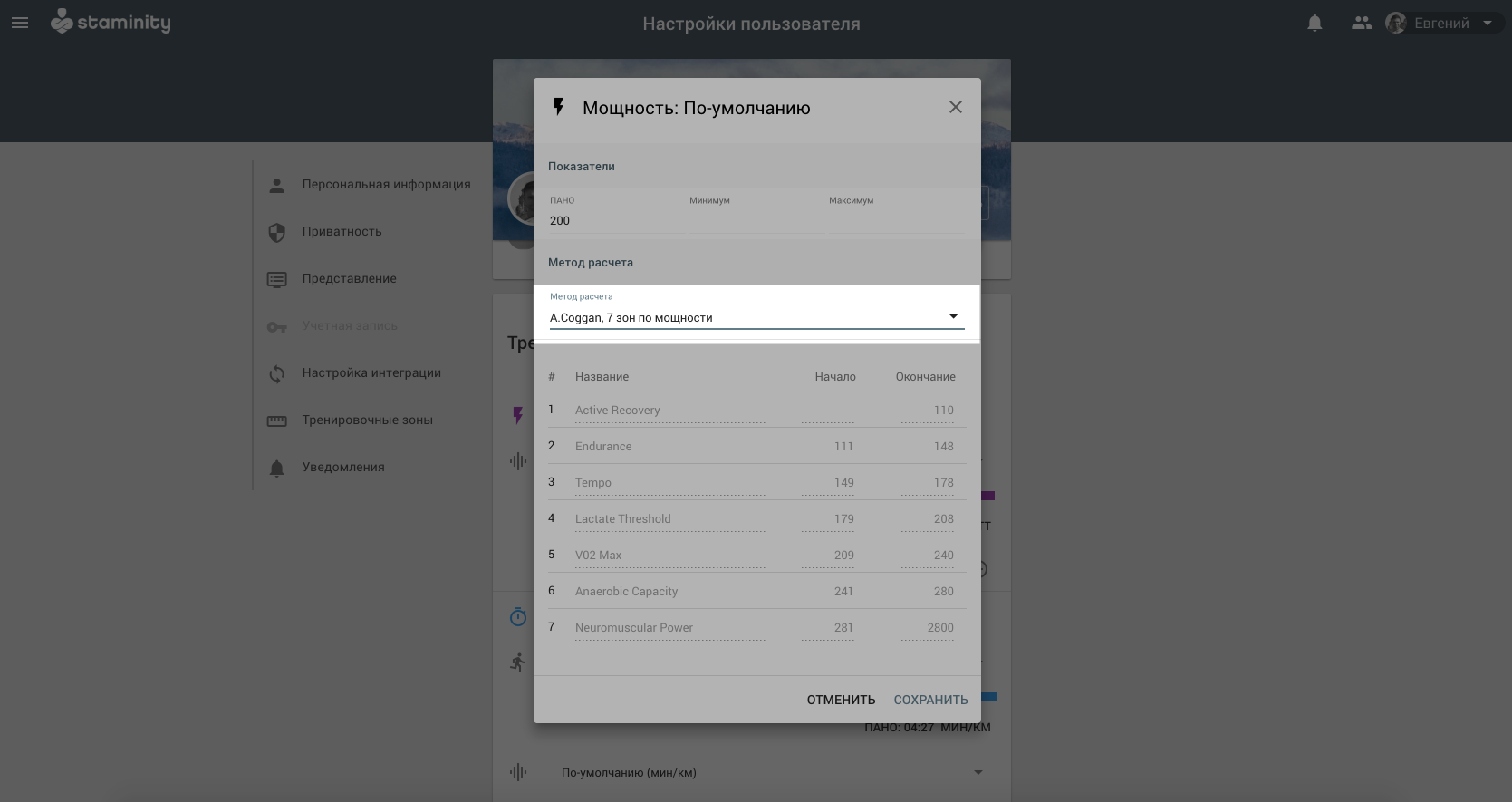